Yes, I'm really writing this review after 1am.
Yes, I've really been playing this game at this hour on a work night.
No, I was not using headphones or playing with the volume turned down low.

My wife is away on a business trip, and so after spending the evening at a bar with the guys, I decided that coming home to sing at the top of my lungs by myself would be the best use of my temporary bachelorhood.

It was not waste of time. This game is rad.

Basically, this is an expansion disk for the original Lips singing game. I'm calling it an expansion because it only gives you 250 new achievement points, and the gamerscore is listed under the "Lips" section if you've already played that game. Sure, it's a new game that you can buy at the store, packaged with two microphones, but the way the achievements work are the same sort of thing as in Grand Theft Auto: Liberty City Stories. It's new and retail, so it counts for the project, but I'm still thinking this is more of an expansion than a sequel. :-)

Party Classics is basically the same game as Lips was: A great little karaoke game that your friends can jump in and out of at will. If they're not singing on one of the two mics, that's ok...because your friends can participate by using the controllers as "Noise makers" (hitting certain buttons to trigger sound effects along with the beat). At it's core, it's clearly supposed to be a party game. Unfortunately, I don't think I've ever "partied" while playing this.

If I try to think back, I don't think I've ever played this one with more than one person, except maybe in a contest at work once. It was basically our version of "American Idol" and we had members of the band "The Presidents of the USA" there to judge our bad karaoke in this game. In the end, I somehow won "Best performance" for singing Nivrana's "In Bloom". I believe what sent the judges over the top (other than the fact I picked the only song by a another Seattle band in the game) was when I played an imaginary drum solo using some rock band drum sticks, then kicked over a few chairs in the cafeteria. There was video of this, and it used to be on "Inside Xbox", but thankfully...it has been long since taken down. This is probably good, considering it was probably embarrassing to watch. Good times.

Moving along with the review, there is a feature in this game that I'm not sure was in the original, but if it was...I never discovered it until tonight. You can record your performances and play them back later as part of a music video. I have to go on record saying this is an absolutely awesome idea for a singing game, but it might also be horrible.

This was a trick question. It's not great, because when you are me...and this actually happens to you, it's not exactly flattering. I did all of the above things, then went back to listen to the song I had just finished. I realized that it was not awesome at all. In fact, I sound like Forrest Gump. The game lied to me and gave me a "Pitch Perfect" achievement for singing James: "Laid", but now I know the truth. I wasn't pitch perfect. I wasn't even on key. Hell, half the song...I didn't even sing the right lyrics (and they were right there on the screen the whole time, so that's pretty impressive). This game lies to you. "Lips service" one might call it. One just did.

Overall score: 8 out of 10. It may have let me know how badly I sing, but this game was still a lot of fun. Like the original Lips, you can sing songs from the disk, download songs from the marketplace, or sing things that are copied to your hard drive, PC or even your MP3 player. This makes the game experience pretty much endless. Lips is karaoke at it's most pure, with some fun little add-ons . Party Classics is a lot of fun.

Here are a bunch of achievements I got, while singing alone tonight. You'll notice they start on the 23rd and continue on the 24th. I should really go to bed now. :-) 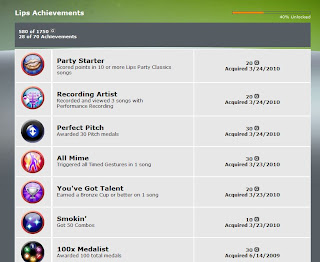