Last week, before my trip to California...my friend Rachel was kind enough to lend me an entire carrying case full of Nintendo DS games that she owns that I've never played. I'm picturing it below to convey the awesomeness here. 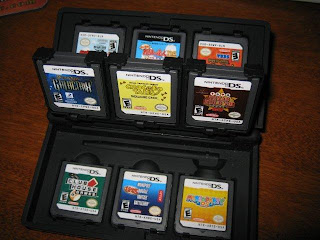 By itself, this little case is enough to take me within 15 or 20 games of the end of this challenge, and while I'm not sure I'll play each of these, it's great to have them on reserve to ensure that I get through the home stretch. If Gamefly is late with a shipment, or I can't find a good game I want to borrow from a friend (or at work), then I've got this little black box of awesomeness to rely on for games.

This morning, I was on a plane to Seattle from California, and I decided to dip into the game case for the first time to try something Rachel had let me borrow. I saw this little game.

As the cover picture is 100% Japanese, I had no idea what it was called, but I was pretty sure the little cartoon thing on the front was the "Taiko Drummer" guy. I've never had a chance to play a Taiko game, but I was very aware of them, and always curious. Sure enough, after booting this...I realized it was indeed Taiko Drummer (and searching Wikipedia after I landed later confirmed the exact title for me).

Taiko drummer is basically a rhythm game, which you can play using the buttons or the stylus.
I'd love to describe the "plot" or the menus, but they are totally in Japanese (a first for the challenge). Luckily for me, the interface was simple enough that I could fumble my way through it and get right into gameplay.

Bang along to the beat with the buttons, the stylus, or the shoulder buttons which are the snares. I am pretty sure the goal is to rack up combos to score more points….although I have no idea what the grades I scored actually were.

The setlist was very Japanese, though some of the songs had a little bit of English mixed in to their titles. One song was Yankee Doodle Dandy, I thought that was pretty funny (and I certainly knew the beat to it). The rest of the songs I tried were all very alien to me, and frankly...too easy to beat. I am sure there are multiple difficulty menus here, but I didn't know how to select them in Japanese.

Overall Score? 5/10. As a concept goes, it's a fun game. The gameplay was fun too. The only reason I'm not rating it higher is...well...I don't speak the language. There's only so much you can do in a game like this without being able to read the text. According to everything I can find online, there is not an an English version of this game just yet, so I'll have to be happy with my experience playing this one. On the other hand, there is a version of this game that features actual drums. I'd love to give it a try sometime. 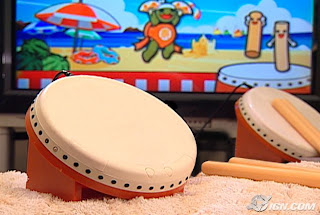 I've figured out to get to the harder difficulty, which makes it more challenging and more fun, you are right about that. But yeah, there's only so much fun to be had when you can't exactly figure out what's going on. There are some challenges you can't do unless your avatar is wearing the right outfit, and I can't figure out what outfit it's telling me to wear. So that's where I am. And why I haven't played that particular game in months. :)