How many different ways can they remix Pac Man? There have been more than two dozen different sequels over the years (spread across just about every gaming platform ever created), completely saturating the market to the point where you feel like if you've played one, you've played them all.

Over all those years, there really haven't been many innovations in the game. Ms. Pac Man added a bow to the character (and tightened up the gameplay a bit). There have been other versions that had nothing to do with eating dots and ghosts in mazes (Pac Man has been a race car driver, taught typing and done all sorts of other stuff). Still, the core gameplay has stayed mostly the same...as it is with this sequel.

So what's different this time around? First of all, you can switch map backgrounds. That's kind of cool (I chose the neon maps from the original Championship edition released in 2007 on Xbox Live Arcade). Just like Championship edition, you still try to clear the dots out of one side of the maze at a time (to make an item appear on the other side). This time around though, there is a new twist: More ghosts.

It's not just Inky, Pinky, Blinky and Clyde (or Sue) anymore. This time...it's their whole freakin' family. There can be well over 2o ghosts on the screen at the same time, and you'll often be chased by a They Might Be Giants sized conga line of them. Luckily for you, they aren't as fast (or as smart) in these quantities, so you can usually stay one or two dots ahead of them.

This time around, you also have these little "smart bombs" you can use to blow the ghosts away from you and send them to the other sides of the screen. This is useful when you're almost about to die. Time also slows down when you're trapped, giving you time to escape the situation.

If these additions make the game sound a bit easier, trust me when I say, it's not. It's actually a lot more complex than the original, and because there are no more static power pellets on each maze (you have to earn them)...you can't really follow patterns anymore. Each game is different, and they're tough. It's definitely Pac-Man for the next generation.

Overall Score? 6.5/10. Better than average, but nothing I would call a "classic". I enjoyed playing it, but it's not going to become a regular thing for me or anything. It's sort of like a mash-up song of a song you already liked. It's very cool the first time you hear it, but with very few exceptions...it usually doesn't eclipse the original game for you. If you're looking for a great Pac Man game on XBLA, get the original Championship Edition before this one, and maybe Ms. Pac Man as well. THEN, if you're still hooked, go ahead and buy this one.

Achievements? If you're a Pac Man pro, you'll be able to grab a few like I did. I did all of this in an hour or two. :-) 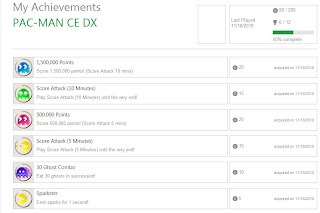