As a kid growing up in California, I was really into hip hop and rap music. I especially liked songs with a lot of record scratching, including those by Run DMC, Jazzy Jeff & The Fresh Prince and L.L. Cool J. I actually remember wearing out more than a couple of record players trying to scratch up records I had as a kid. Unfortunately, the kid-approved record players I had weren't made for this, and I got in trouble on more than one occasion for wrecking the needle while imitating music I was hearing on the radio.

As a teenager in high school, I had some friends who happened to have their own turntables, and on some awesome days after school, they'd let me come over and scratch up my favorite records. I still have a few cassette "mixes" from those days, and believe me, they are awful. When I was 16 or 17, I really wanted to buy a set of my own...but for whatever reason I never did. My dreams of becoming "Mixmaster J" went dormant until I got to re-awaken them with this awesome game.

When DJ Hero came out, naturally, I was pretty jazzed. Playing a plastic guitar is one thing, but these plastic turntables are a whole new evolution in the world of make believe musical instruments.

Like Guitar Hero, you're required to hit colored buttons along with the music as they scroll down the screen. You have control of the platter (pretend record) and you can spin it backwards and forwards to the beat. There's a small mixer, and you have a cross-fader (switch between one record and another) and an "effects knob" that allows you to tweak the sound of the track. A real turntable doesn't have one of these, and I think it should have been a line switch instead (so you could "Transform"). The final unique button on this controller is called the "Euphoria" button, which is basically Star Power when you've gotten a big enough combo.

For under 100 bucks (including the game) this thing truly feels like a value. The controller is solid, doesn't feel cheap at all, and it's actually comparable to the feeling you get with some of the less expensive digital turntable sets you might pick up at Best Buy. I got to play with it a little bit at work and then last year, my little sister gave me the original game and turntable as a Christmas present. I was really happy to get it, and while I wouldn't say I'm "awesome" at it, it's certainly fun...and I enjoy playing.

This year, DJ Hero 2 is here, and while they haven't messed with the platform itself, they've added some new moves to the mix. The "freestyle scratching" is pretty awesome, and actually gives you more control over the track itself. It's not as accurate as a real turntable, but you have a little bit of control here...and that's more than the first one had. You can also trigger samples by pushing a button, which is a lot of fun...if not a bit laggy. The soundtrack in this game is fantastic, and I really hope it's available on CD someday.

The career mode is split up into different mixes now, and you'll play three at a time instead of the normal one. I liked this, because it felt like a "real" mix. They've also added a vocalist to this game, and that works like Karaoke Revolution. It turns it into more of a two player game than it was before, which is cool if you have a friend over who might happen to be scared of trying the turntable controller out but doesn't mind grabbing the mic.

Overall Score? 8.5/10 Aside from a few new tweaks, this game is almost exactly the same as the first one. That's not a bad thing, because the first one is awesome...and I'm totally going to buy it. The only drawbacks I can think of here are that not a lot of people play it (so it's not quite as social as Rock Band), and you need a table to play it on...so it's not one of those things you can comfortably sit on the couch and play. Still...a great experience and a must buy for anyone who enjoyed the first game.

Achievements? I have a few here so far, but there will be more to come someday: 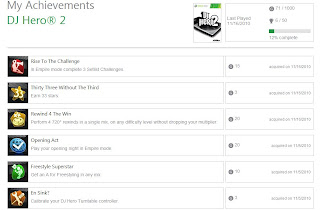