I've seen a few reviews of this game that say something along the lines of "Finally, a video game featuring rap songs" like it's the first one. It's not people. In fact, it's not even close. Over the years, there have been others, including "50 Cent: Get on da mic" (which I actually own)...DJ Hero (which I also own) and even Def Jam Vendetta which somehow combined rap with wrestling. Hell, I remember the "make your own music" games by the likes of Kriss Kross, Marky Mark for the Sega CD player oh so long ago.

Still, this is the first fully rap-based karaoke game for the current generation of consoles, and as such, I had to give it a try. As much as I love my Rock Band and Karaoke Revolution...the one thing all of these music games are short on is rap songs. This game definitely does it's part to fill that gap.

I started out in the career, and progressed my way through about 15 songs before my voice started to get hoarse. Classics like "Gin N Juice", "Brass Monkey", "Juicy", "Push it" and a ton of other favorites are here, pretty much something for everyone if you ask me. Unfortunately, the songs are all edited (which sucks, because I know a lot of the dirty versions by heart). Singing Ice Cube's "It was a good day" without cuss words is actually pretty difficult.

In addition to a career mode, this game has also got a "freestyle" mode, where you pick a pre-made beat and rap to it. You plug in your video camera, and if you like what you've recorded, you can upload it for other people to view and rate. Holy crap, I wish I'd had this when I was 12. These days, I'd be too embarrassed to post evidence online of my less than awesome MC skillz, but I think in my youth, I probably would have gone for it.

Overall Score? 8/10. This is a very solid game, and I'm pretty sure I'm going to have to buy myself a copy. If you like rap, there's a good selection of songs, from the old-school to stuff released this year, and I think it'll definitely be fun for a party or get together. If you don't like rap? Well...avoid this and stick to Guitar Hero. 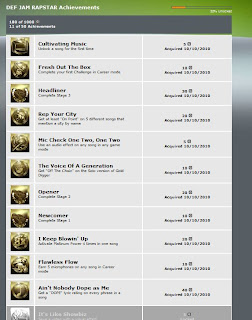