Of all the different types of games that I've played during this challenge, there are probably still a few genres I haven't touched on yet, and Mech games was one of them. I've never been a huge mech game fan (with some exceptions). I used to enjoy going to Wizards of the Coast in the University district in Seattle and playing a multiplayer mech game with some of my roommates. For the life of me, I can't remember the name of the game now, but they had these giant pods you would sit in to control your mechs, and it was a death match sort of thing. Very cool.

Later, on the original Xbox...I tried Steel Battalion, which was a mech game that needed a ginormous two hundred dollar controller in order to play. 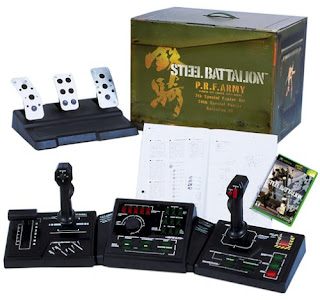 I never owned it, even though I once had the chance to grab a copy for free (complete with controller) a few years back after the 360 launched. Some people at work were just giving them away (they take up a lot of space) and even though it would have been cool to have it, I know I wouldn't have played it. I passed and let it go to a bigger fan.

This morning, I tried out Front Mission Evolved, which just game out a couple of weeks ago. I was expecting another confusing mech game that focused around configuring your mech to inflict as much damage as possible on the enemy, and then fighting them (very carefully) in battle.

I was so wrong.

This game is actually kind of awesome. It's more of a third person shooter than a mech game. Even though you're in a mech (and even though you do in fact need to power it up with different weapons and stuff), the bulk of the game is an action/arcade style shooter...and I'm really enjoying it so far.

The game takes place in the future. Two new nations are at war with each other, and there are some giant elevators to space (it sounds silly, but they look really cool) that are the center of planetary defense. You're just some dude that works in research at a mech factory when war breaks out, and you take the newest prototype into the city to try and save your dad before his building gets blown up.

The cut scenes are really well done, the graphics in the game aren't bad...and the combat is fun. I am not a fan of powering up the mech (you have to worry about the weight and power of each component you choose)...but I'm dealing with it. I'm about 6 or 7 levels into the campaign so far, and the story is corny, but interesting enough to keep me playing. There's also a whole multiplayer mode you can jump into, but I don't think I'll be doing that.

Overall Score? 7.25/10. The game actually reminds me a little of Earth Defense Force, one of my favorite (cheesy) games of all time. Sure, it's a mindless shooter...but sometimes...those are fun. While I won't run out and buy this, I would be willing to come back to it someday, which is what earns it the mighty seven and change.

Achievements? I got a few: 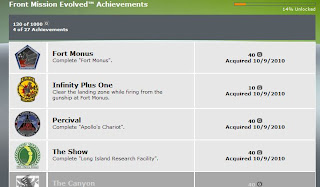