I really enjoy Pinball games, whether it's on real machines located in an arcade or bowling alley...or sitting on my couch playing a video game. Real pinball machines are getting harder and harder to find these days, as most of the manufacturers stopped making them years ago, but there are still plenty of places to go in Seattle where you can get a game of pinball on. Shorty's Arcade downtown is one such example. They have some of the greatest machines ever made down there, as well as some tasty hot dogs. The last time I went, I sampled both....before heading to the bar next door for many drinks, and then back again for more pinball later. Another place I discovered recently was Ground Kontrol in Portland, OR...and holy crap...that place is like the Mecca of classic gaming. Their game selection is, for lack of a better word: Amazing.

Anyway, Pinball FX is a free (FREE!) game download, but before you get too excited, I should note that...like Game Room...the free download is mostly just a sample to get you to buy new tables. Unlike Game Room, I'm happy to spend my money on these new tables, because I think they are done extremely well..and they're fun to play over and over again.

If you own the original Pinball FX (which I do), you'll get a free import into Pinball FX2, where all the tables you already own will look better and where I actually think they're more fun to play. You'll also be able to try any of the downloadable tables from right there on the main screen, and buy them if you like them. As much as it bugs my wallet, I can see myself buying most of these in the future....because I really enjoy playing games like this while I'm talking on the phone or something. They're great, mindless fun.

Each table you play has it's own set of goals, and while some are easy to master, some are incredibly hard. The high scores needed to rack up crazy achievements are ridiculous...yet, people on the leaderboards have done it...so I know they're possible. The game shows your score vs. the world and vs. your friends after every match...so it's a lot like a real arcade that way. You're always on the prowl, trying to beat that next high score.

Overall Score? 8/10. This is my favorite arcade game of the moment, and the only reason I'm not rating it higher is that technically...the game itself doesn't offer a lot. You have to buy a lot of the good tables, but really...when you do the math, you're not spending more than you would on a normal arcade game in order to buy them. This game is free to begin with, and the tables are cheap, so to me...that's a good deal.


Achievements? Just the tip of the iceberg I think. 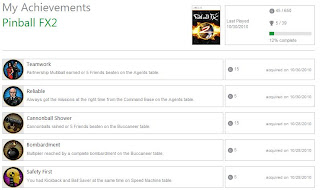