About a month ago, it seemed you couldn't go a week without seeing a commercial for this game. I actually had it on my list to play for awhile, but it sort of got lost in the shuffle and I only picked it up this evening because our bar trivia night got canceled. It seems that tonight, fate chose for me to play some Xbox.

Mafia 2 starts out with a pretty impressive story. You're a young immigrant, jailed for stealing a TV and sent off to fight in the war instead of doing prison time. The first chapter takes place in Italy, where the soldiers you're fighting all eventually lay down their guns because some famous gangster over there tells them to. Very Godfather-esque.

Anyway, you get back to the states and begin your life of crime. This game is very much a Grand Theft Auto clone, or maybe more of a Saints Row clone...except it's set in the classic Godfather era of gangsters, in a city very much like Liberty City....er...New York.

Like some of those other games, the town feels fairly "alive". Maybe not quite as alive as Liberty City, but when you walk down the street, people talk to you, and you can start fights or have random conversations with them. I helped some random lady fix her car after she and her husband had a fight about it as I walked by.

Speaking of fighting, I actually like the hand to hand combat in this game more than the fighting in GTA. It somehow feels a little more polished, and it's easier to pull off combos. Cool stuff. Guns are not quite as fun, although I only got to use a few (two in the war and one in the city so far).

The driving (always a big part of any open world game) is only ok. The cars don't handle as well as you might like them to, and I thought that the city felt rather "small" in comparison to Liberty City in Grand Theft auto. The driving actually reminds me more of a "tacked on" driving mode to an action game than the driving in any of the Grand Theft auto titles....and I crashed into stuff I wasn't aiming for more than a few times.

While I could see myself playing through some more of this, I have to be honest and say that I don't even want to start it until I've finished Episodes from Liberty City, which I started in the very beginning of this year and then never came back to. That was a much more fun game to play than this is, and although they're set in different time periods...the basic concept is the same. It's sort of a "Call of Duty" or "Battlefield" type of decision, and in this case, I'll pick GTA every time.

Overall Score? 7/10. Better than average, interesting and fun...but nothing that made me say "Oh my gosh, I have to drop everything and play this right now". I'm still hooked on Reach, I have a GTA game that I haven't finished yet, and there are a dozen other games that I can't wait for this holiday. I might come back to this someday...but it's pretty far down the list of games I have.

Achievements? I got quite a few this evening. 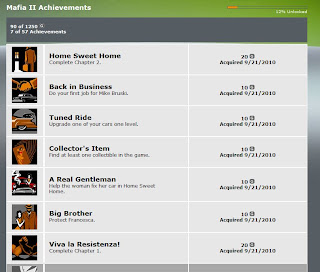