Today, I tried another "Summer of Arcade" title, this time it's not a remake or an sequel, it's a brand new property called "Limbo". Limbo is an awesome title, unlike most games I've played before, and yet instantly playable. If you read any game news at all, you've probably heard endless praise heaped on this game already, and it's all deserved. This one is awesome.

I woke up early this morning for some reason, and started playing Limbo. 2 hours later, I was surprised to learn that I was going to be late for a meeting at work...because 11 chapters of the game had just flown by, and I hadn't paused or stopped for even a moment.

The game is composed mainly of tons of black and Grey (what you see in the achievements screen below is pretty much it). Almost everything on screen is in a shadow of some kind, and while this sort of darkness might piss me off in a shooter, in this game...it's sort of awesome.

Every few feet, you'll stumble upon a puzzle, and some of them take several tries to solve. Sure, they sound simple (ride a log across a river), but first you have to figure out how to drag that log from point A to point B, then drop it at just the right point so you can jump across it. Some levels involve pulleys, weight-pads, gravity shifting...and it just gets harder from there. There have been a couple of puzzles in this game I simply couldn't figure out without a little help from youtube....taking me back to my days as a kid, where I had to call the Nintendo Power helpline to get passed something I was stuck on. It's awesomely frustrating.

So this weekend I sat down and finished Limbo, and those last few levels are incredibly tough. There are these timed gravity puzzles, where you hit a button and then gravity is reversed for a few seconds while you run passed saws on the ground, or jump over caverns and what-not. It's just an awesome game...and the only thing I'm sad about is the lack of replay value. Once you've played through it, other than the final achievement for making it through the whole thing in one sitting dying less than five times, it's basically done. I don't really mind that they didn't tack on some silly multiplayer mode or something, but I'd love some DLC with more levels, and more hidden easter eggs.

Overall Score? 9/10. One of the best platformers I've played this year, hands down.

Achievements? These are the ones I had as of the 29th, and I went ahead and beat it afterward. 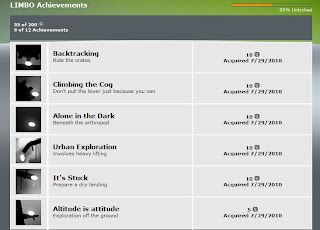