Video game review number one hundred and eighty nine in my 365 Games in 365 Days project is "Ninety Nine Nights 2".

The first Ninety Nine Nights was my real introduction to the "Hack and Slash" genre, which for some reason I had never played before. Earlier this year, I played and reviewed my first Dynasty Warriors game, and until that point...I didn't really have many other games for reference. Fast forward to now and I'm starting to know what I like in one of these suckers.

The game begins with you vs. an entire army. Honestly...this is about the silliest scenario one can imagine, but it's fun to spin around and attack hordes of soldiers while they stand still and wait to die. I can't imagine any scenario where anyone could be successful at this in real life, and maybe that's why it's cool. Realistic? Not at all...but awesome.

I can picture myself at a music festival, standing in the back of a huge crowd...with only one desire: Get to the front of the stage. I can picture myself pulling out a giant sword (which happens to be on fire).....and yet, I simply can't imagine that people would just continue swaying to the music, waiting for their turn to be mowed down by my sword of awesomeness. It's just to silly to even daydream about it, yet there are entire game franchises built on the concept.

The enemies in this game have no musical act to keep them entertained, they have nothing to distract them from killing you...yet, they just stand there and let you mow them down, hundreds at a time. In the second level of this game, I was able to get a 1000 hit combo. That's 1000 different hits without ever getting touched by an enemy soldier. As silly as it is....I have to admit, it's satisfying.

There's a story in this game, but I didn't really care what it was. You're a soldier and you need to kill everyone that's not you. You repeat this until you get an achievement.

Level two began with a very long cut scene starring a girl with quite possibly the best cleavage I've ever seen in a video game. She's wearing some sort of lingerie thing, and despite the fact that she has pink hair, a giant tramp stamp on her chest...(and of course her not being real)...she's pretty damn hot.

I played through another level until I died. When that happened...it was game over. No extra lives, no re-spawning, you just get a giant red game over screen, and the game asks if you want to start over again at your last checkpoint. My immediate response was "Fuck no".

It's actually a very abrupt experience for a game that has you wielding godlike powers and mowing down dozens of enemies at a time without any danger whatsoever. Suddenly, one little minion happens to hit you, and bam...game over.

While this won't stop me from playing this game some more, it certainly did stop me for the afternoon.

My overall score? So far..it's a 6/10. Slightly above average. I loved the girl with the awesome rack, but other than her appearance...this game was pretty boring. For 20 of the 60 minutes or so that I played it, I was on the phone...and I think that's actually the best time to play this game. Play it while you're listening to music, or talking on the phone, or maybe while you're at work...if you can get away with it. :-)

Achievements: Some are easy to earn, and I got those...but I was almost to the point where they were going to become really hard to get. "Beat the entire game with so-and-so." "Get perfect ratings on each level". Too bad there wasn't an achievement that involved getting that one girl to take a shower or something. That would be one I'd keep playing for. 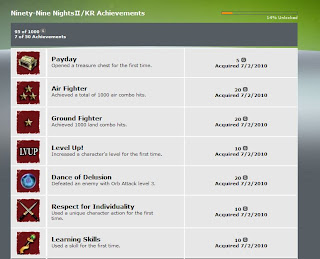