Video game review number one hundred and fifty three in my 365 Games in 365 Days project is"Bioshock 2".

Bioshock 2 is the sequel to the first video game I ever played from start to finish with my wife. We started it together one Friday in July 2007 and finished it that Monday night. Technically, it was as single player came, but she helped remember maps, door codes...and got completely engrossed in the story the same way I did....so I've always felt like we played it together. Over the years, I always ranked that game among my favorites of all time, not just because it was awesome...but because sharing the story with someone in real time was a lot of fun. It was definitely a rare experience as far as gaming goes for me.

When I heard about Bioshock 2, I told Heather and we decided that we'd play together again. Unfortunately, this challenge has kept my gaming schedule so full that we're only just now getting around to it. I decided to sink this weekend into it, and spent all day and night Sunday playing straight through.

We actually might have finished in one day, but I was playing with the Vita-Chambers turned off (for an achievement), and I died at the end of one level....which made it necessary to start that level all over again. Lost between 60-90 minutes of progress...which sucked all sorts of ass. After that, I said "Screw the stupid achievement" and turned the respawning chambers back on.

Although I had forgotten some of the details of the original (it has been three years), the world itself was instantly familiar. Once again, you're back in the awesome underwater city of Rapture..and you get sucked right into it. The enemies are just as crazy (maybe moreso) as the first one. For those who haven't played these games, I suppose the best way to describe them is "zombie-like", but they have a lot more personality than your average zombie. They'll curse you from across the room, scream out when you kill them...and there are such a variety of characters it never really gets old.

This time around, you have a much larger variety of weapons to use, considering you are a "Big Daddy". There are plenty of creative weapons including the spear gun, complete with "rocket spears" that will stick someone before exploding. Another one I liked was the good old drill, which you could either hit your enemies with, or drill into them.

You also have "plasmids" (think magical powers) that you can supplement your guns with. Whether it was shock, fire, freeze or the cool "cyclone", I used these constantly once again. You can shock puddles of water if an enemy is standing in one, and electrocute them. If they happen to be standing in oil? Flame on. This game gives you as many creative ways to kill someone as a Grand Theft Auto game, maybe more.

The story is very interesting...and ties into the first one. I don't want to spoil any details about the plot, but suffice it to say...this game is worth playing. Even though I had forgotten some of the stuff from the first one, I wasn't lost. This would be a good standalone game, and it's even better if you've played the original. When we finished it, I was wishing for more...and I even ventured into the multiplayer to see what that was all about, just for fun. It's very difficult (everyone online was better than me) but after 2 or 3 matches...I started to realize what I was doing...and I could see playing more of it. The multiplayer was the only part of the game that Heather wasn't interested in, and after two days of playing, I can't really blame her.

Overall Score? 9.25/10. Bioshock 2 lives up to the first one in every way a sequel should. The gameplay is familiar, but there's some new stuff too. The story is good, but also faithful to the first one. They introduce new characters you actually care about...and have plenty of cameos from the folks you met in the last one. I could see myself playing through this one again for more achievements, and there's a whole multiplayer mode I barely touched. PLENTY of replay value. That's about as good as a game gets these days.

Achievements? Oh yeah. I have more than half already...so many that I couldn't capture them all on the screen. Some are spoilers, so try not to blow up the list and read it if you want to be surprised. :-) 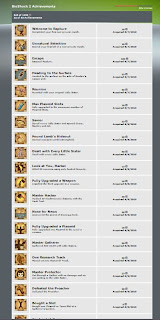