A little creature is sitting outside of his house when he sees a bunch of flying boats attacking his town. He runs inside and luckily for him, he happens to own a jet pack and suit of armor. The battle begins.

This seems to be how many classic arcade games started out when I was a kid, and that's how Rocket Knight (a throwback to the Sega Genesis) begins. I'm not sure what the main character is. He looks like a puppy, or a kangaroo, or a fox, or maybe a bear...but I think he's actually supposed to be an opossum. You be the judge: 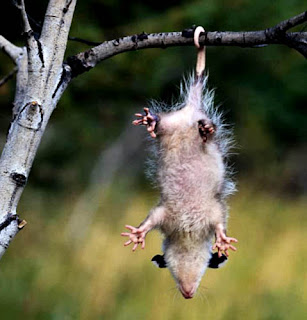 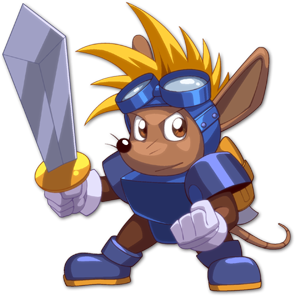 Anyway...whatever he is, "Sparkster" (the Rocket Knight) has traveled all the way from the 1990's to teach us what platformers are all about. This one is pretty good. You can fly, you can shoot your enemies (or slice them up with your sword)...all in a cartoonish little world that reminds me of the places Sonic the Hedgehog used to live (before his games went all 3D and started sucking ass)

There are gems to collect, secrets to find...and although this is a side scroller, there are multiple ways to finish each level. You can take to the air and travel via the "high road", or run along the bottom of the level seeing how the "low road" thing goes. I found the game was most fun when I mixed it up.

I've only played in the arcade setting, and so far I've made it through three stages. There aren't a ton of achievements, but I did manage to unlock a couple. The bulk of them are unlocked for beating the game, getting through on harder difficulties, or doing it in a set amount of time. I probably won't replay it that many times...but I do think I'll eventually finish it.

For now though, I'm giving this a 7/10. It's a great little platformer that reminds me of the good old days, but the graphics are updated for the current generation. This one is something I can see myself picking up and playing again in the future from time to time.

Achievements: Here are the few I unlocked. I don't think I'll be able to get too many more (as mentioned above, a lot of them are pretty grindy).