What can I say about the Halo Reach beta? Well...now that it's May 3rd and it's public, anything I want to say. This game is going to be freakin' awesome. I'll admit, I've been playing a ton of Call of Duty these last six months, and Halo 3 has fallen by the wayside. The title that was once the king of my Xbox has been shelved in favor of Modern Warfare 2. ODST came along and got some play for awhile, but because it didn't have multiplayer matchmaking, I couldn't get into it the way I want to. It's so hard to get four friends together to play ODST, compared to jumping online and playing with strangers in Call of Duty or Halo 3.

Reach is going to be the next big thing, and this beta proves it. They've added all sorts of new stuff including Jet Packs (my personal favorite) and other power ups like personal shields, invisibility and sprinting. You can level up your character and earn new armor. This isn't quite as good as Call of Duty (where you earn better weapons and stuff) but it's still cool compared to Halo 3.

The new maps are awesome. They give you access to only a handful in the beta (Sword Base, Powerhouse and Overlook) but they're each different enough to keep the gameplay a lot of fun. Like the Halo 3 and Halo 2 multiplayer betas before this one, I consider this like an appetizer before the main course this fall....but you could play it every night for hours on end if you wanted to.

Overall Score? Judging this against other betas, it's a 10/10. Against most other full games I've played this year...it's still going to get an insanely high mark. Like most Halo games, I imagine I will play the campaign a few times, and then it's all multiplayer. This beta...is the multiplayer, just 4 or 5 months early.

Achievements? No..there aren't any, but I did unlock this cool hoodie for my avatar. 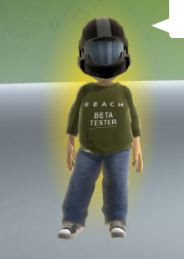 I also managed to take a few cool screenshots in the last game I played. In both of them, I'm the red guy. :-) 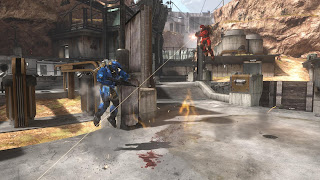 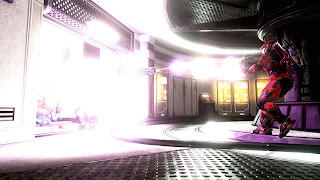