Video game number one hundred and thirteen: How to train your Dragon

Video game review number one hundred and thirteen in my 365 Games in 365 Days project is"How to train your Dragon".

This game is one of the more complex kids games that I can remember playing in my gaming history. I saw the movie, and it gave me all sorts of ideas what the video game might be like. I imagined fighting Dragons, maybe running through some jumping puzzles, perhaps a flying game. I was picturing your typical action game, based on a kid's movie. I figured it would be pretty fun. Instead, this game is basically a kid's RPG. It's not focused as much on fighting as it is leveling up your dragons and collecting items to give to them. I'm not sure how enjoyable that will be for kids, but I thought it was pretty fun.

You run around the town, collecting ingredients to make special potions for your Dragons, all of whom live in the basement of your little hut. Every once in awhile, you take them up to the mountains to train them (sort of like the movie) and eventually you take them to the arena to fight them. Although the arena is the same as in the movie, you aren't actually doing combat against a dragon. Instead, you're riding your dragon and fighting other people's dragons.

The fights range from pretty hard to ridiculously easy. If you don't train your dragon properly...you're going to get your ass beaten pretty badly. If you train your dragon (which basically consists of playing grindy mini-games)...you'll be able to dominate pretty much any other dragon you fight. I have this one dragon who has a special move that assures he pretty much can't lose...but it took hours to get him that way.

Overall? 7/10. The gameplay is deep enough that I felt compelled to play a lot longer than I would have ordinarily played a game like this. I was reminded a little of Fable, a little of Street Fighter and the rest was all classic kid's game stuff. Again, I don't know whether or not this game would be any good for an actual kid...but I liked it.

Achievements? I got quite a few. 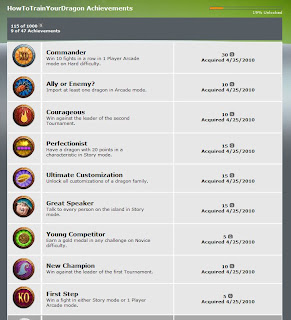