Video game number one hundred and ten: After Burner Climax

I probably haven't played an Afterburner game since I was a teenager, making weekend trips to my local Scandia Fun Center. This was like my idea of heaven, a place to play arcade games, mini-golf and drive go-karts. I remember the Afterburner games, because they were more like rides than games. They were pretty high tech in the 1980's...and had a swinging seat that would move as you did barrel rolls. It didn't actually flip over, but you felt more like you were in the game. I think it cost a dollar to play, so I didn't get to indulge as often as I might have liked to.

I had the console versions on the Sega Master System...and they were fun, but nothing really compares with the giant arcade console where you can swing around in that seat, with the surround sound speakers blaring behind you. This game has updated graphics, but honestly...I felt like I was missing the best part of that arcade experience because I wasn't sitting in a cabinet, rocking back and forth.

Overall Score? 6/10. It's better than average, but it's not as good as the classic, especially if you were accustomed to saving up your cash to play the arcade version the way I was when I was a kid.

Achievements? I probably could nail all 200 in this one pretty easily, but I don't think I'll try. 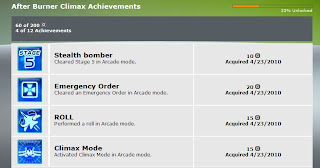