Game review number twenty in my 365 Games in 365 Days project is "Thrilleville: Off the Rails".

Thrillville Off the Rails is an amusement park simulator. If you've played Roller Coaster Tycoon, you probably understand the basic concept. If you're like me, you probably didn't play Roller Coaster Tycoon, because you're not really into simulators. If you're like me....you might have borrowed this game because you thought it might be fun to try building some crazy roller coasters.

You start the game by creating a character. I chose a little kid, because like me...he was named Joshua by his creators. Some people might think it strange to have a small child own an amusement park, but Cartman had one in South Park and that's precedent enough for me.

I took the tutorials and began building my park. I started with some video games, because...well...I like video games. I played one called "Stunt Rider" which reminded me a lot of a scaled down version of Trials HD. I wasn't able to get the high score on my first try, but I did pop an achievement for doing some flips (much like Trials, it's pretty easy to do).

After screwing around with my arcade games, I built a giant rollercoaster. I made it super tall and super fast (turned the nausea factor up to 100%). I did this to get a couple of achievements, and also because I thought it would look really awesome. Unfortunately, riding it wasn't nearly as fun as building it. The "on ride" graphics in this game are pretty lame. I'm not sure why I thought it would be awesome....

As the manager, one of your duties is to walk around the park interacting with your guests. You can select from several different pre-scripted chats....until your guests like you. Three days ago, I was playing Mass Effect 2, having conversations about my character's demise and resurrection. Tonight, I'm asking people if they like basketball, and telling them that my amusement park has the best coasters around.

I'm sure this game is a good introduction to simulators for kids. It's probably an easy 1000 points too. Unfortunately, I'm not interested in either of those things right now....and playing this game was tedious.

Overall Score: 2 out of 10. Worst game I've played so far this year.

Below are the achievements I was able to unlock with minimal effort after less than an hour. If you tried...I'm sure you could do better. 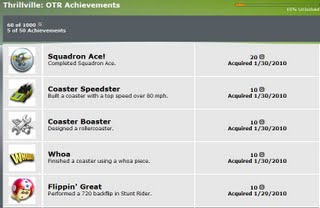